To my Hero, Robert A Heinlein: Happy birthday buddy! 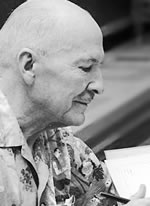 My childhood was not that great, but still, I wouldn't trade if for a different one. All that crap shaped me towards the hilarious, smart and talented and so very humble and modest person you see before you today. You wouldn't think that mean, alcoholic parents with the combined intelligence of parsley should have that effect on a young man. But as it turns out, they didn't.

In the absence of good role models in my life I turned to books to find them. Among those books were science fiction from my Hero, Robert A Heinlein. I actually have a small altar in my home in His Honor with some pictures, candles and quotes, and I try to set aside time every day for a quiet prayer by it and maybe a little dancing too.

So I feel I owe big thanks to Robert A Heinlein for providing me with very good role models. It's his birthday today (2008-07-07), 101 years old. Congratulations buddy and thanks! 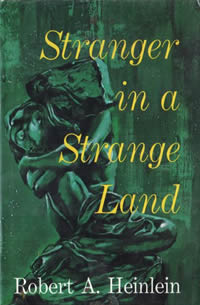 Two books have changed my life more than any others, one of them is Stranger in a strange Land by Robert A Heinlein and the other is Teaching as a Subversive Activity by Neil Postman and Charles Weingartner, but the latter book will be the topic for another entry later.

What really changed me as a person was the books questioning about pretty much everything. It questioned among other things organized religion, sex, family, relationships, government and many other aspects of human culture. It also argued for individual liberty and the responsibilities this implies. I have some quotes from Robert A Heinleins writings right here, enjoy!

I had, as almost all people at that age, taken a lot of the world at face value. It hadn't occured to me to question things so this book helped me lift the vail from my eyes and discover not only other perspectives and viewpoints of familiar things. But also that the act of questioning things we take for granted really can lead you to some very interesting places. There was a lot of discoveries I did later that happened because I started with this book. The other book I mentioned fit nicely into this too.

The story in "Stranger in a Strange Land"

Once upon a time there was a Martian named Valentine Michael Smith.

The line accomplishes a lot in describing a person in just three words and also setting the tone of the book. It mixes the very exotic notion of a person from  another planet (Mars), with the name of the person and the meanings (fancy word day: connotations) theese names hold for us. Valentine has an air of romance and love around it, Michael has many religious connotations and of cource Smith, the most common surname in English, implies that even something as a exotic as a Martian could be "one of us". It is quite a feat accomplishing all that in a name with three words.

The book follows a young man: Michael Valentine Smith. He was born on the first manned expedition to Mars in which all the people died, except for him. The planet Mars turned out to be inhabited of a very old species with a culture very different from our own. They found Michael and raised him from when he was an infant until the second manned expedition to Mars arrived some twenty years later and found Michael and also the Martians.

When he returned to earth he has this unique perspective on everything in our culture since he has never seen any of it before. He has no experience, no history, no preconcived notions, no assumptions that filters what he sees. So all the crazy things that we, who has a cultural filter firmly in place, thinks make perfect sense, really doesn't when viewed without one.

And that right there, is where Robert A Heinlein is such a genious. He constructs a character in this novel that can question everything he sees and ask why certain customs, assumption and belifes exists in the first place. But also if theese things we've grown accustomed to actually do what they are supposed to do. Are the invention of marriage and nuclear family really the best way to assure happiness? Is sex really supposed to be entangled with so much shame and codemnation from religion? What does religion and the doings of different Gods and prophets in religious text really teach us about Gods, prophets and ourselves?

Touring the world through Michael Valentine Smiths eyes was therefore a mindblowing experience for me.

of Robert A Heinlein

I'll finish this way too long article with a list of my favourite novels by Robert A Heinlein, so you also can start discovering this great author. Don't miss the mention of The Heinlein Archive in the end too.

The entire list of his works is here: Robert A Heinlein Bibliography

All the descriptions in the links below contains spoilers! Beware!

In the parenthesis short story descriptions and sometimes why I like it. The order are in the same order as in the bibliography above, not the order I like them.

Sixth Column (The United States is invaded by EuroAsians in a surprise attack and all that is left of the military is a small research lab inside a mountain. The novel begins with a new major arriving at the facility founding most of them dead. He as the new leader of the facility has the ardous task of making a small group of about five scrawny scientists into a military fighting force able to strike back at the invadors and take back the entire continental USA from the invading force numbering in the millions. Sounds exiting, doesn't it? Well, it is!)

Double Star (An actor is hired to portray the president of the United States and then the actual president dies and the actor must continue the charadeeven though he really dislikes the presidents politics. The actor has to make a choice beteween his previous life as he know it or continue this other life where he probably can do more good. I love this book because Heinlein has once again portrayed a person that changes and grows over time into something better. A film with a similar storyline is Dave.)

The Door into Summer (I love this story about an engineer named Daniel who makes robots and have a funny cat. The story is also about suspended animation, timetravel, betrayal and that revenge is a dish best served cold. The title comes from the cat Pete who refuses to go outside if there is snow on the ground. So he regularly makes Daniel open every door in the house, looking for the door that leads into summer, because according to cat logic there must be one.)

Have Space Suit - Will Travel (A young man wins an actual space suit. He restores it to former glory and learn a lot in the process, this is another one of Heinleins story where the main character changes and grow over time. In the book there is a talk between the dad and the son about his current education which is really good. The dad argues that if he want's to learn something actually useful, he can't rely solely on school administrators, so the young man starts learning stuff for himself. I love that part. When he is out walking in the space suit a alien ship lands with a girl and an alien called Mother aboard. Another ship arrives and kidnap all three and takes them to the moon!)

Citizen of the galaxy (This story about a young boy taken into slavery, his escape, adoption into a family of space-traveling traders with some seriously weird but under the circumstances logical customs was really gripping. This is another story of Heinlein where the main character changes and grows a lot.)

Job: A comedy of justice (This story takes the story of Job from the Bible and gives it a new twist and also discusses religion at length which I thoroughly enjoy.)

The moon is a harsh mistress (This is a story about the entire moon being a prison colony, that has no choice but to rise up against the rule from earth. The moons population has also developed som seriously weird but logical customs stemming from the fact that women is in short supply. The phrase "There ain't no such thing as a free lunch" (TANSTAAFL) mening that everything cost something to someone and also that you have to give up something to get something comes from this book. One of the main characters in this book is a very large computer that has come alive and one of the first things it tries to do is learn how to write jokes. Gotta love that!)

I will fear no evil (An old, very rich man is dying and his mind is transfered into the body of his young female assistant. The mind of both people is present in the body who have an ongoing dialogue on the difference between the sexes. The books deals with the usual Robert A Heinlein motives like love, relationship, immortality and individualism. One movie with a similar story is All of me)

Stranger in a strange land (See above. The word Grok mening to really understand something and making it a part of yourself comes from this book. This book was also very influential on the hippie movement. Expecially the sexual revolution, counterculture and the idea of polyamore.  )

Glory Road (This is a fantasy novel about a man that sees an newspaper ad: "Are you a coward? We badly need a Hero". He answers the ad in person and is transported to another place and time and has to do battle with some great foes, i.e. dragons and such. A really fun read.)

Then you might enjoy the The Heinlein archives that contains 198,057 pages and photographs from Robert and Virginia Heinlein.

They have scanned almost everything in his archives so you can actually buy scans of the original scripts of his novels for a couple of dollars. In a download for Stranger in a Strange Land for instance is letters to editors, the outline of the book, the TWO versions of this really important book (the first published one is a lot shorter than the original), articles and ads referencing "Stranger" and letters Robert A Heinlein has written about this book. All 19 files containing thousand of pages cost $38. A bargain in my mind! :)