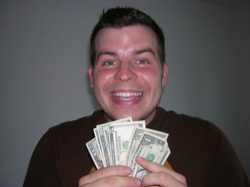 Let me count the ways...

Today, I'm happy to report, the universe took an refreshing new approach to the whole reward-and-punishment system and it also told me in no uncertain terms how hard work is connected to getting money.

Usually, I need to do a lot of hard work of a degrading, menial and boring nature who also is of questionable morality. Society as a whole and females in particular generally also frowns upon people of my chosen profession. Most of the time I get a reward of some kind but that reward is, as luck would have it, never ever ever ever on par with the disgusting nature of theese tasks.

Actually I have earlier surmised that all this is likely because I must have been a God awful person in an earlier life, or actually several lives... Probably even thousands of lives, and this time around, I'm really gonna get it. So I work with computers...

All I had to do, this particular and beautiful day, was open my mail. In there was a letter from my bank. Inside a note that states a transfer have been made into my business account. I read the sender, it was a company I've never had contact with, but it is a pretty big one here in Sweden, like on of the top 100 or someting, or maybe 50. And also the amount was a 215 SEK (that is about 28,76 USD or 21,75 Euro). 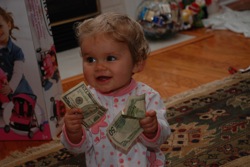 I have spent many hours dreaming of the things I can do when all my hard work pays off and I become filthy stinking rich, but as the universe now have showed me, none of that hard work really matters!  Hard work is not connected to getting money!  I'm not at all bitter about the many many many thousand of hours spent working hard and learning mad skillz for pretty much nothing (so far). All I had to do all along was open my mail! Great! I'm so happy! Goddammit!

Now, what could I do with all that cash? That was my next thought, and when you, my dear reader, ponder the  "ideas" below, please keep in mind that I am a morally corrupt, totally irresponsible and so very immature, guy.

Well, I wouldn't get my hopes up just yet, usually the Universe likes to butter me up right before it smites me just to make sure I really feel it. So bad things usually follows right after good things. At least for me personally. I try to see myself as something more than an organic pain collector racing towards oblivion, but it's hard sometimes.

Update: It has been three weeks now, and no one has asked me about it yet. But I sure do sleep well nowdays. I've got money in the bank!

Update: A friend of my also gave me an excellent tip which I did not act upon. Swedish law says that I could declare bankruptcy, use the money and pay all my taxes and other stuff, keep the rest and that would be perfectly legal! Well exept the "keep the rest"-part, but the tax part is correct. In Sweden taxes are huge too. The legality of it is interesting also because I'm actually not allowed to pay the sender of the money before I pay the taxes I personally owe.

Update: I got a nice letter from the big corporation and one pretty funny phonecall: "-You wouldn't happen to have my money would you?". -"What money?".  It turns out that it was not that big corporation that did wrong, it was a writer, who happened to have the same first name as me no less. I'm sure the latter part is another hidden message from the universe. He had had worked for six months on a book and the money was his payment for it. So I sent the money back. He sent me a bottle of fine single malt whiskey as a thanks. Cheers!

The phrase: "Don't think of yourself as an organic pain collector racing towards oblivion" is something Dogbert says to Dilbert in one of my absolute favourite Dilbert strips. That phrase really crcks me up. The creator of Dilbert is of course Scott Adams, and he is also one of my personal heroes. He also has a blog: Scott Adams Blog.