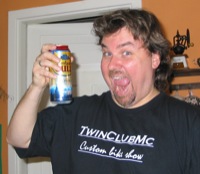 I have many interesting flaws, but I consider one of my best flaws to be my complete inability to hold my liquor. This is mainly because I did not drink any alcohol until about about ten years ago when I reached the mature age of about 30 and started making some terrible decisions. Coincidentally proving that age really has nothing to do with maturity. Look at me for instance, I'm about forty years old and am about as mature as any anyone, that is about twelve years of age or younger...

Now you may wonder why did I start drinking about 10 years ago if I had resisted that long? Well, I work with computers so I have just two words for you: Windows 95! No, that's not it, I'm just kidding. As we all know Windows 95 made crackheads, not drunks, out of thousands of computer nerds when they tried to use their plug-n-play printer to actually print something, anything. Also I understand that Microsoft have recently started putting crack in the boxes of Windows Vista to make you buy them. Write that down and check it out.

The real thruth in why I started drinking is, wait for it... A woman! Didn't see that one coming, did you? I have a good story about the first time I was drunk. I started with sweet stuff, you know, sweet drinks with umbrellas, the old liquid panty remover (aka Southern Comfort) and Baileys. Those are really macho too! 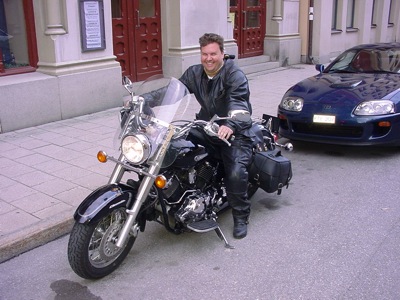 Then I got me a nice custom motorcycle and I discovered that you just couldn't go in to a biker bar and order a "forest fruit cider please, with a twist". When you do that you wake up in the dumpster outside with a bottle shoved up your... well, you know. Don't plan on doing that again. So I had to start drinking beer and I have been happy ever since... Did I say happy? I meant drunk. I'm not always happy, sometimes I'm out of beer. Right now for instance. The best thing I have ever bought, that fills my heart with joy, warmth and happiness, my own beer tap, is empty right now. That makes me sad.

But still I consider myself very lucky. I had as most people about two parents. One was a mean vicios drunk prone to fistfights, screaming and naked dancing and the other was my father. He was actually funny when he drank, well, at least that is what I remember.

There were three reasons I didn't start to drink.

One: both my parents were in fact alcoholics at one time. I could become that too since there is a genetic component to it, so if I wasn't careful, I could become a parent too.

Two: I, being very proud of my brain didn't like the whole concept of becoming drunk and being stupid as soup.

And third: I had a 50% chance of being a mean drunk (after my mother), and not a funny drunk, life-of-the-party kind of way (after my father).  I didn't like those odds. Either way I was going to become one of my parents.

Well, all three have been thoroughly tested under extreme battle conditions and I'm happy to report that I'm not a alcoholic and I am indeed a fun person to be around when I'm lit up like a christmas tree and I become just the right amount of stupid! I just need the one beer, before I leave the "I'm less than useless and nobody loves me"-zone where I spend most of my days and enter the "Feeling no pain"-zone, also known as my happy place. This makes me a very lucky person I think, because I just need one beer to feel good, and I don't need another and then another, just the one. For you single desperate ladies out there in reader land with bad judgment and bad vision, this means I'm a really cheap date. In more ways than one!

But I have been drunk a few times, the first time was amazing!

The first time I got drunk was right after I swore of women completely in favour of helium filled blow up doll, disco balls, lights, mirrors, bitchin' sound system playing Bee Gees "Staying Alive" and a remote control to it all ... and right before I found happiness in a gold-colored beverage, meaning beer.

Before beer I tried a drink called a screaming orgasm and I loved it. My recepie is Baileys, Kahlua, Whiskey, Milk and Ice, but usually there are Vodka instead of Whiskey, and sometimes even Amaretto which is horrible, and therefore put in drinks by snotty bartenders.

One day I wanted to try what it is like being totally drunk, since I didn't know what it was like. So I started making these pretty stiff drinks, 50 cc of each liquor, 150 cc in total in each. I had two. Then I got the amazing  but rather dizzy idea to walk over to my ex girlfriends house.

When I broke it off she moved only 500 meters away to a small flat with her new boyfriend, within three weeks of the end of our ten year relationship. I'm not bitter about that. No. The therapy, group therapy, electric shock therapy, primal screaming therapy, aroma therapy, medication and oh so many pills, have helped a lot, and I feel better now.

Well she had a window slightly ajar, second flor, and what I heard there was a sound I know very well. I turned around and went home and made another Screaming Orgasm, which is pretty ironic, don't you think?

If you are keeping count out there in reader-land this is three 150 cc drink, 450 cc in total, about 10 "normal" drinks. Dean Martin said "You are not really drunk if you can lie on the floor without holding on". I know exactly what that is like. That is what I did, hold on to the floor, well actually my bed since it was conveniently placed right where I fell down after the third drink. The whole room was spinning, I couldn't belive it: -"I'm lying still dammit, stop spinning!" was what I shouted repeatedly to the walls in my room right before I felt it was time to start worshipping the porcelain God.

And that my friends was the first time I got really drunk! I have not been that drunk more then 840 times after that, so I didn't really learn anything. Take that as a warning, never have a girlfriend, order a cider in a biker bar or have parents!