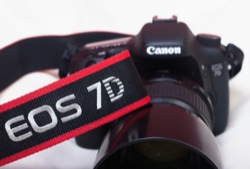 I'm working on making a website about studying, learning stuff and also exactly how much education as we know it really blows. It's going to be really funny.

To do that I need to make a few videos, about a hundred or so. I was looking at a regular video camera (like Canon HF S21), but a friend of mine who makes music-videos suggested I have a look at the Canon EOS 7D. So I did and when I see him again I will sincerely thank him for his suggestion, that will cost me a LOT of money. :)

I have decided to purchase one of theese after looking at a lot of information on the internets. This entry contains a few cool movies I have been sending to friends and family to show what the camera I'm currently drooling over can do. Later entrys will be about resources about learning how to use it, and maybe another entry will be about places on the internet were this type of camera is discussed (forums, blogs, newssites). Hopefully anyways.

Click the Read More to se the videos shot with Canon EOS 7D.

When the first video below (Reverie) was made and released it started a big movement on the internet. That camera (Canon EOS 5D Mark II) was the first from Canon or any camera maker that could record HD (High Definition) videos looking that good, especially in low light situations, and this is the interesting part: at that price. Suddenly people who want to make movies, but can't afford those expensive film cameras can shoot a movie that has the same "look". That "movie look", where you often se very shallow focus that directs the audience to see something particular. That look is achieved with good lenses to these cameras who are very light sensitive.

But of course there are a lot of disadvantages filming with a DLSR camera. First of all it is mainly a still camera that happes to record video too. They can not follow focus automatically like a video camera can, they can't record sound with good quality and they can only record a max of 12 minutes in one continuous shooting. But as people are discovering, you can work around theese disadvantages (mostly by buying more stuff), and the moviepart of the camera, is just beautiful.

Don't take my word for it, check out these videos.

The video that started the affordable movie making movement with Canon EOS cameras. This one was made with Canon EOS 5D Mark II and became really big on the internets and "started it all".

Read more info about this project on the Vimeo-page, and also find out more about Vincent Laforet and his company here, also he has a blog here.

City of Lakes by Pacific Pictures

This is a actual Indian three day wedding video with a sub plot. It's made with several DSLR (Digital Single Lens Reflex - cameras), one of them the Canon EOS 7D.

Read more about this project on the Vimeo-page, and also at DVDInfo - "City of lakes - A Hybrid Production in India" that has a lot about the production of this movie.

The Sword Maker and the Swordsman by Matthew Allard

This is one version of a video about Taiwans last swordmaker (he made the Green Destiny sword, known from the movie Crouching Tiger Hidden Dragon), there is another version vith voice overs, interviews that were sent on the Al Jazeera network (A news channel in English based in the Middle East). Don't miss that as well: "Taiwan's last swordmaker - 07 jan 10" The version below are the beautiful images, no voice overs and therefore not much information.

Read more about this video on the Vimeo-page. The same user has a lot of cool videos, one about Geishas, another about Samurais.

This video is about a motorcycle engineer Shinya Kimura originally from Japan, now based in Californa. He builds custom motorcycles without drawing plans first, just bending steel and aluminium to speak to peoples emotions.

Read more about this video on the Vimeo-page. Also, Shinya has a webpage here.

Philip Bloom is one of the people behind DSLR success. He has made a lot of videos on theese cameras and know the extremely well and also shows that one can make som really impressive stuff with theese cameras. This video is shot with Canon EOS 5D and 7D and maybe a few more and also a Glide Track is used.

Read more about this video on the Vimeo-page. Also Philip Bloom has blogged about the making of this video and all equipment used in his blog: The tale of Lucasfilm, Skywalker Ranch, Star Wars and Canon DSLRs on a 40 foot screen! This is the first time theese cameras has been put up on the big screen, and the cool thing is that they work in this situation. This makes theese cameras into something that a person can use to make actual movies, with a much lower budget than has been required before.

This particular video was part of a Shoot Out where a few DSLR's where extensively tested in different situations and compared to actual film cameras. Theese thest were later shown for a group of film-makers in the best movie theatre in the world, the one at Skywalker Ranch, (the base for Lucas Films). The comments from the audience that contained some of the worlds best known movie photographers are really interesting. In many cases theese DSLR's camera are just as good or even better than film cameras. Not in all situations, but many.

See the complete The Great Camera Shootout 2010 for yourself, it is made of three parts and an intro.

There was a competition in which the rules where that the same lines needed to be used in all entries. The lines where:

– I have never seen one this close.

The competition was arranged by Philips to sell a new TV with cinema proportions, and also with Ridley Scott (the man that directed the Alien movie and also the worlds most famous advertisment, the one for Apple, shown at Super Bowl 1984, also known as Apple Big Brother Ad.).

There is a link below to the entire competitions YouTube Channel with all entries.

I happened to find one of them, actually made with this camera, but I also have to show you the cool one, made by one of Ridley Scotts proteges, Carl Erik Rinsch.

This movie started a bidding war between movie companies to get "the rest" of it. Google The Gift and Carl Erik Rinsch as I did to find out more.

Don't forget to hit the 1080 size and the full screen option. Se red arrows below. 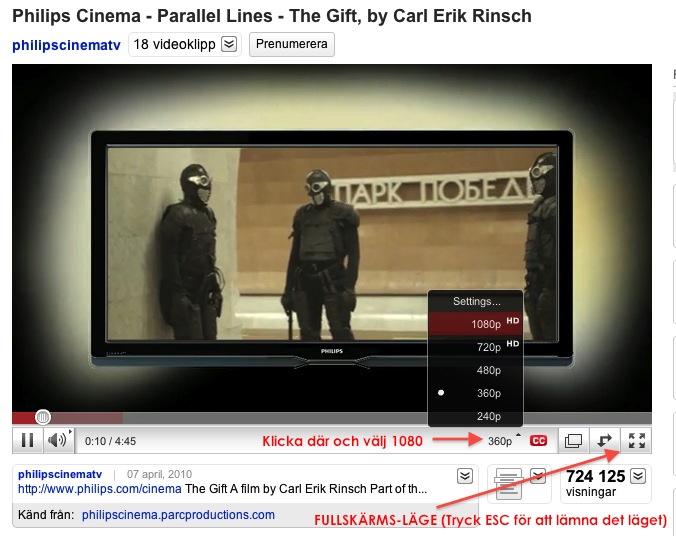 Philips Cinema TV channel on YouTube contains a lot of really cool videos. Don't miss it! Not all of them are made with this camera, but some of them probably are.

Canon EOS 7D Groups or Channels on Vimeo and YouTube 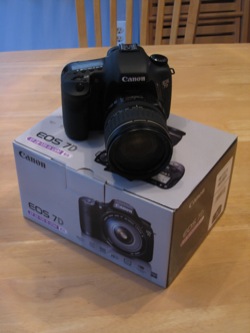 For most cameras on the market there is a group where users upload videos made with that camera. Here is links to the ones on Vimeo and Youtube.

The group for Canon EOS 7D on Vimeo contains 8860 movies right now. Have a look, some of them are really amazing.

There doesn't seem to be a channel for Canon EOS 7D on Youtube, but a simple search shows a lot of videos.